Using Social Media to Put Bodies in Seats: How the Cleveland Indians Are Creating Buzz

Using Social Media to Put Bodies in Seats: How the Cleveland Indians Are Creating Buzz

If you are a sports fan or just know one, you know a fan’s passion for his or her team and favorite sport runs deep.  Trust me, I am a sports widow whose husband lives for his teams.   The growth of social media has given these rabid fans – as well as casual ones – a constant outlet to express their feelings about their team.  Once, these fans would call into their local sports radio station to express their joys and frustrations – and only other listeners would hear them.  Now, fans can join a team’s Facebook page, follow the Twitter feed of a team or favorite player, follow various blogs or create their own to express their feelings or provide information to other fans.

Yet, while the fans have wider access, what’s in it for the teams? How can the teams tap into these passions in a way they haven’t before?   Is there a way that teams, the leagues and sponsors can use their fans’ social media interaction to help put more people in seats and generate more revenue?    Can the team create positive buzz, especially when they aren’t doing well?  The Cleveland Indians think so.  (see the link below) 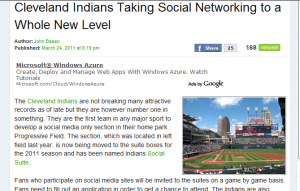 The Indians created a specific outlet and connection to social media gurus in their city.  The Tribe Social Suite, a 12-seat area with WIFI specifically for bloggers and social media users, is designed to create positive buzz.  Those that get placed in these seats are treated like more traditional media and provided with press kits, a media guide and press releases.  They are free to tweet, blog and communicate with their followers during the game.  The only caveat is they don’t get access to the players.  Part of the allure of social media is that you really can’t control it, and smartly, the Indians aren’t trying to control the message.  Instead, they are trying to use it to generate ticket sales and brand awareness. 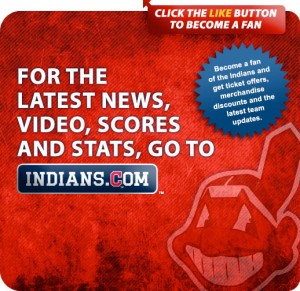 They also are putting Twitter and Facebook to work.  There are special offers on the team’s Facebook site plus a partnership with MLB.com and their AtBat’11 app to provide fans the option to check in at the ballpark to receive special discounts.

This is not a short-term strategy by any means, since PR and media of any kind takes time to build in a way that will convert positive feelings to ticket purchases.  However, the Indians are on the forefront for sports teams, and other organizations can learn from what Cleveland is doing.

Make Use of Your Brand Loyalists

CPG companies have been doing this for quite some time on Facebook, Twitter and brand websites.  Your loyal fans and buyers are your best advocates, so why not use them?  What’s more, giving a little love to these people will help them get over any disappointments they have had with your brand.  Sports teams are no different, although it helps when the team is winning.  Giving loyal customers incentives to get them to buy a product or a seat at a game is a great reward for being loyal, particularly when the fans are so frustrated with their team they don’t want to go and see them play .  It may be easier to get these lapsed customers back than trying to attract completely new ones.  Maybe the Jacksonville Jaguars should have been trying this the last few years as attendance dwindled.  New fans are great, too, but harder to get.  Cleveland is tapping into not only brand loyalists, but vocal advocates to promote the brand which the organization hopes results in getting more people in those seats.

One other point – you have to admit that getting to sit in the Social Media Suite is going to be considered cool among fans.  A devoted fan is going to love the experience.  These fans feel like they are now important VIPs.  They are elevated to their followers but also to the franchise in their eyes.  This experience will likely result in them becoming even more devoted.

Accept You Can’t Control the Message

As I stated earlier, when brands try and control the message too much, they are seen as inauthentic.  The point of social media is to engage and interact with your customer, and if you are too controlling about what is posted or said, you will lose those wanting a true outlet to express how they feel about the product or to get information.  Interestingly, by putting these bloggers in seats and treating them with respect like other “official” media, it makes it harder for these bloggers to see the Indians in a negative light.

OK, I admit this is hard for organizations to do when funds are low.  Going to more tried and true methods to incent purchase is the obvious strategy.  However, with risk often comes reward, and if you aren’t generating revenue the traditional way, then why not try something completely new?  Cleveland had little to lose and much to gain.  I have worked at organizations that were simply too afraid of what the consumer would say about their product to engage in true social media.  “What if they complain or say they hate the product?” my manager would ask.  Truthfully, I wanted to answer, “So what?”  But the real answer to her was that the point was to engage people in a conversation and provide restitution and a different product experience to move their opinion.  Consumers don’t want the usual “buy me” advertising message, regardless if it is a product, service or entertainment.  They want a voice and to interact, and to get there, you need to take risks.

Social Media is a Key Component to Good PR Strategy

Once upon a time PR was about press releases and media outreach.  It was about creating opportunities for someone to talk to the press about the brand and its initiatives to get the message out there.  PR folks would reach out to the media, schedule media tours, etc.  That still has its place, but social media has changed that landscape and media now means bloggers and online influencers as well.  While working on infant products, we found that there was no one more important to speak about our products than the mommy bloggers.  They got our message out faster and better than any advertising campaign.  They connected with their audience, provided free samples and became wonderful advocates for the products.  We made sure to allow moms to have a voice on the brand Facebook page if there was a product issue.  The Cleveland Indians recognize that media for them will go beyond the press in the press box.  Having someone say, “I had a great time at the Indians’ game yesterday.  This is better than I remember,” will go further than any advertising campaign.

Example of a local Cleveland Blog talking about the Social Suite.

OK, but how does this really result in people putting their butts in the seats, you ask?  People want a good time and they want to root for their team.  This effort provides positive buzz about the team, which in turn provides people an incentive to go see the Indians.  They have also done something smart by creating discounts, incentives and offers for those that follow and participate in the social media.   The positive PR combined with sales incentives is the perfect combination to generate revenue.  Realistically, this will be something that will grow over time, but if they put in the right vehicles to measure the success, they can see what is working and what isn’t and how much revenue it is actually generating.  With those answers, they can tweak the format to ultimately drive a favorable ROI.

The good news for the Indians is that they are winning again which is going to start to fill the stadium, but with their added social media initiative they are in a win/win situation.  Word has it that it is working for the brand loyalists, but is slow to build for new fans.  It will be interesting to see if this idea catches on with other sports teams and how Cleveland expands and adjusts the program in the future.   Believe me, if the Red Sox start doing this my husband will be first in line to participate.  As a former sports writer he always dreamed of covering the Red Sox.  Stay tuned.